From 2005 – to which we just added Walk in the Eternity Where All Your Dissipated Dreams Shock, an hour and twelve minute track on PANICMACHINE, and the download includes the accompanying 146 page book, all for free.

With Panic Pandemic, the process begun in the prior album continues and complexifies. The skeleton of the creature Psychosis Ex Machina devoured and subsumed is now transmogrified into an armature of bones on which is hung a mage-fetish, an effigy-object of sacrifice: standing for what? Western Civilization? Your inner soul? The “Revolution”? All of the above? All of the below? The reality-twister that is the artist/mage in cahoots with cohort Choronzon, madly and yet with infinite care decorates these remains with the detritus of cultural effluvia turned inside out, into caricatures and mockeries, ornaments of fear, disdain, madness and love, carrying memory-imprints of notions, persons, lives, and what happens when such are turned against themselves and drained of purity of essence. Some of these ornaments have mirrors at their centres in which you’ll see a familiar face. Stare too long into them, and you may scare yourself blind…but if you dare not look, you might just be, already.

This album release isn’t merely a bunch of “songs” but an elabourate interplay of word, sound and image, heralding the direction of Choronzon’s future, reaching out far beyond the limits imposed upon a “rock band”. 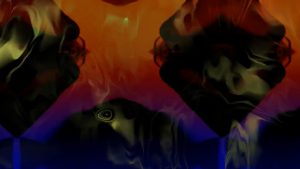 Panic Pandemic is two CDs – a double-album of moving music and noise, resisting all genre-labels, while engulfing and digesting same into itself. – The audio comes bundled with a full-colour print book by P. Emerson Williams, an accomplished artist as well as noisician, which features his artworks in both oil and digital formats, with the sort of paper quality and printing they deserve. Though it’s the size of a “coffee-table” book, it’s not just a bunch of pretty pictures. Textuality runs through and around the images: a twisting, interleaved alternation of monologue and moodscape that just might scare the living shit out of you. And you thought you didn’t scare easily? There’s a first time for everything… A rare experience, not to be missed.

Ontological Anarchism,”The end came and nobody noticed. No bangs or whimpers; not a ripple. The souls of the faithful were swept up to their reward, leaving a mass of aimless, fearful husks behind. They too did not notice what had happened. Their essence was shredded and consumed by the ghost they’d created over generations. To the faithless, the shells of the faithful seemed to be much the same, perhaps there was a bit more of an air of desperation, but it was hard to quantify.

The wrecks could be seen, though nobody ever noticed them, their vehicles, perfect in their shine, cell phones always at their ear, or seemingly talking to themselves with their earpieces in. They are but characters in a nightmare being experienced by a drunk lying on a street in a parallel universe. He wonders in his sleep who could possibly want to listen to these vile, empty vessels for hours on end.

A poison in his gut twists at his insides, so he shifts in his stupor. A wave engulfs a small nation. A war drags on in an arid and hot part of the globe. Death-squads wander through the surrounding streets. They know who he is and wish to separate this pole axed creator and the world he’s dreamt up. If they can bring it into a separate existence they can colonize it, for it already contains a population of perfect slaves.

The light was going out of both worlds, fading into entropic languor. The end became boring centuries before it saw fit to happen. As usual the promised spectacle failed to entrance. Audience participation was necessary to pull off the trick, but the illusion could not be agreed on.

Gods were created, and though formed fully in the minds of humans, ruled in unquestioned tyranny. Every one was dead by the end, though they had never lived. They had been brought into existence by human thought and feeling, but had also pre-dated them. They survive the end and predate the beginning. None of them were real.

The death-squad smelled blood. They didn’t know the reason for their hunt, nor question it. They’d play. They’d move. This set them apart. Blind rage was a tool to hide the futility of the search for meaning. They wanted the drunk for his self induced psychosis. Many were outside the fence, but didn’t matter any more than the billions of clones within the set limits. It was because he stopped participating, stopped talking about it and started to dream it. He would bring it all with him as he breathed his last. 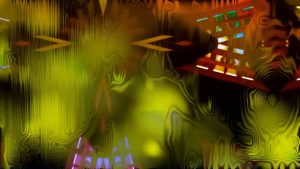 People in the world being dreamed could sense their origin. Some fell into despair, some joined the stupefied creator in his habits, and others remade him in their parent’s image. Most had work to do and couldn’t be bothered to pay attention to nonsense. If the world was to end, they needed to redouble their efforts to get the project completed, the war won, the perfect partner found, the dog washed, the trash taken out. The quickening injected each action with a new urgency for a while, and then this urgency turned into despair, violence, hatred and finally apathy.

The dreamer coughs and a million press releases go out to announce the death of culture in the form of hundreds of talent-deprived young droids. Money shifts its tides in their direction. Perfect shiny vehicles blast the news, rattling windows, killing conversation. A thousand college students die of alcohol poisoning.

Pale ghosts ran inside and barred the doors as the death-squad approached. They knew they weren’t being sought, but they also knew what it would mean to get in their way. The pale spirits vision would start to float and fray at the edges and dissolution unquestionably begin. The members of the squad could feel this too. They knew the dreamer was about to either wake up from his soul shredding trance or die, causing both worlds to be swept back into the nothingness from which it had come.

The light took on a grainy quality that could be felt, like a weak electric current, as the squad approached an alley shouting garbled curses. The buildings leaned in to get a better look and laughed. They could feel themselves melt into the pavement as they reached the corner, beyond which they’d never see. 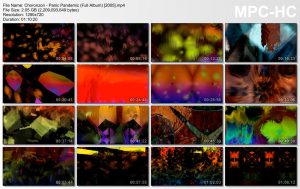 Lament in the pandemic, rooted in instance and position
Heavens and Shock in the air decay in derision
The agitation has eased and the risk abated
And those faith-adorned have uprooted its identity
Brave retractions have betrayed my collapse
Possession has seared you to the Body of abandon
Formless danced the conflict procurers
Rapturous sighs of ecstasy and the chaos of dawn

Confidence flowed to create the storm
Triumph flourishes, extinction unobserved
Viral fury and the horror of us, of you
Choronzon burns up the Human frenzy
Contrasting illusive rides on the current
It shrills in the intention of illusory crisis

The silent stand aside, screaming. Seas of blood swirl around them in a storm of heat and clamor. Decomposition has many things to tell you, things that are crucial to your well-being, truths you have been seeking for generations. Sometimes you act like you can hear, but it loses all coherence at these moments. Sometimes your minds take the atmospheric gibbering and fit a pattern over it, creating seeming inspiration, giving their shouts the shape of stories.

CHORONZON is a node and outlet for protracted rituals of oblique technomancy. This is in-your-face, explicitly damaged, disturbed, maniacal, frightening, psycho-schizo twisted and viciously tortured music, over-expanding itself to a point where it can get barely bearable.

An experimental multimedia project using the name Choronzon[16] has existed since the late eighties, beginning as two separate and unknown cassette-culture projects, one from the west coast of the United States and the other from the eastern USA. When the internet made each project aware of the other, they fused these into one project. As of 2012, they operate the domains for the name Choronzon under .org, .net, and .info, and have released several albums on CD as well as publishing a printed book, Panic Pandemic[17]. Claiming that what they do is not merely music, but also actual magick acts fused into it, the project’s works are distributed through both underground and over-ground means. The ″demon″ Choronzon is cited as an actual member of the project,[18] part of which has centered on extending the mythos around this entity past the Thelemic version of Choronzon into a modernized ″post-abyssal″ one, presenting Choronzon as an anti-hero and demigod, after becoming a reversed Satan in the form of a ″risen demon″.

One thought on “Living from Panic to Panic”