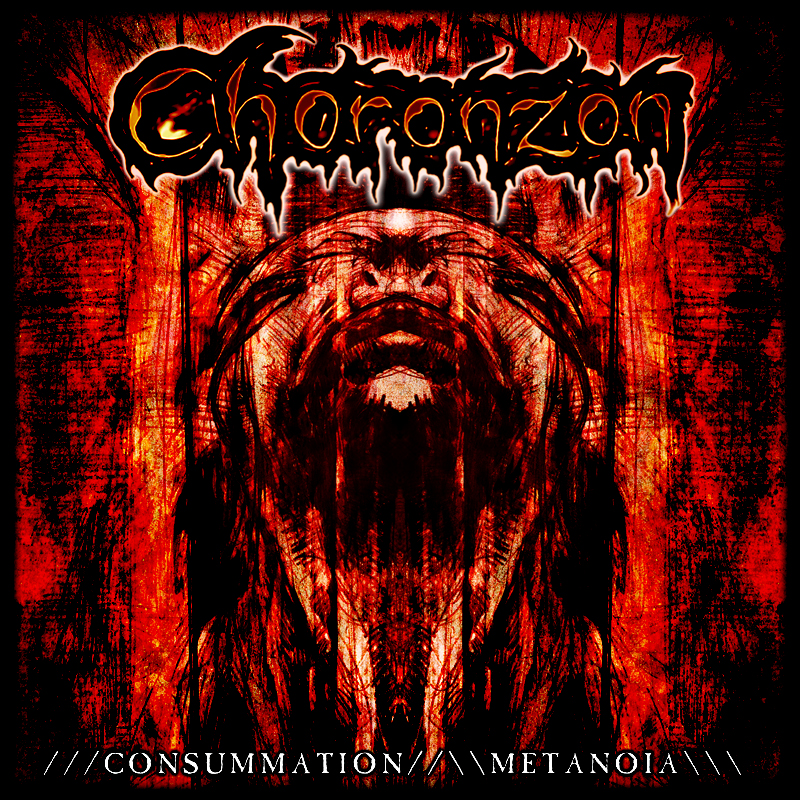 I was set to be on an adventure most peripatetic for this month, but it turned out that the current had something else growing, something that revealed itself only when those who were moved to jump in with me came through with their parts of the vortextual effectuational aural spectacle released this week.

Getting ready for a string of shows had me retreating from the outer world with my guitar and, as always when I spend quality time with an instrument, the massive love for playing guitar of old was rekindled. Add to this the standup bass of Ferenc Teglas and BALEYYG wielding storms of demonic sonics, the Choronzonic Bacchanalia of glossolalia flow was not to be controlled.

There’s a wall to wall video treatment created for this as well, for those ready to receive a xenotransmission straight through the third eye is delivered.

11/05/2012 – As they round out the twenty-sixth year mark in their career, experimental Industrial Blackmetal act CHORONZON continue to build on an ever expanding pallette with their most varied, unusual and harrowing release to date.

Just in time for the apocalypse and completed as a major storm makes landfall on the US East Coast comes a new album from the chaotes of Choronzon. The Consummation of metanoia is the pain of the psyche growing into new states of being. The Consummation of metanoia is the overwhelming transcendence even of healing to a transformation beyond the human to the essence of being human. A joyful opening to psychosis as means of preparation for easier adaptation. An embrace of fragility as a way to feel the full force of one’s strength.

With ///Consummation//\Metanoia\\\ Choronzon completes a creative and narrative arc that began with Ziggurat Of Dead Shibboleths. The code of esoteric insight broken, freedom declared under cover of night and now the mind is transformed and chakras are open. This album is the Veil of Maya lifting as the inner being is revealed after many lifetime’s of journey through war and illusion.

Choronzon are opening up to yet another set of unexplored worlds on this, featuring electric standup bass, keys and percussion from Ferenc Teglas and the multiversal soundscapes of BALEYYG. “We gathered through astral projection to a pre-determined catacomb to generate the sounds by spectral means.” Says Choronzon chaote P. Emerson Williams on the process of creating ///Consummation//\Metanoia\. “Between the three of us we really tapped into multiple streams.” declares Ferenc Teglas. “I got to experience the 333 current as a whispering voice in the distance. This is a very unique album.” Says BALEYYG.

…What about the music on this album? It’s difficult to put it in any mould. Of course it’s black, but is it metal? It’s also industrial and ambiental, it has doomy elements and lot’s of electronics and noise, there is a lot of drone and sludge. Songs can’t be separated from this entirety because only as a whole it gives the right picture of what’s about. Anyway, take this album as a sinister and notorious journey through some of the most diabolical soundscapes ever recorded…

Choronzon have achived what is rare in the underground of today. With dusty and rough production, hypnotic vocal job and culminating atmospheres they deliver an outstanding ritualistic avantgarde musical experience. It’s chaos in sound or better said chaos and magick framed into music.
Review written by: T.V.